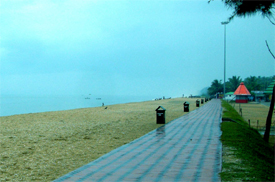 Cherai is in Pallipuram Panchayat which is at the northern end of Vypin Island. Cherai was a part of Kochi and Travancore States prior to the merger of the states.For a land which has a history of less than 700 years since formation, Cherai boasts of a rich cultural heritage with monuments which stand out prominent in India’s history. The Portuguese, Dutch and British dynchasties had ruled the cherai area. The hexagonal fort built by the Portuguese in 1503 still stands as one of the oldest European Monuments of India. The Portuguese had built by the lake side, a theological school called “Vyikotta Seminary” which was later converted into a Leprosy centre by the Dutch. The printing press built at this School in 1577 is claimed to be the first printing press in Kerala by some historians. In 1661, the Dutch defeated the Portuguese, as a result of which the Seminary, which was under Jesuit priests, was transferred alongwith the press to Chendamangalam.

In 1728, the Dutch sold Pallipuram to the King of Travancore while the Leprosy Centre continued to be with the Dutch. These properties came under British authority, eventually, when the British defeated the Dutch in 1795. Till recently, this area was known as “British”. As per the agreement between the Dutch and British, the Leprosy Centre continued to be run till 1921. Afterwards, they were handed over to missionaries to establish a Nunnery and School, which are still functioning. The schools founded by the marauding foreigners did help many in the field of education. But, they were not enough to elevate the poor and downtrodden masses. The caste system prevalent in Kerala forbid the lower caste people from being treated equal, of which Cherai was no exception. 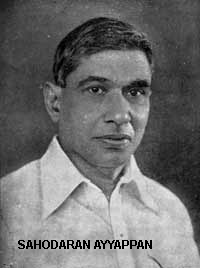 One of the greatest ideological leaders of Kerala, Sahodaran Ayyappan, is a native of Cherai. Majority of Cherai natives were from the lower castes and Ayyappan, coming from Ezhava community, a lower caste, helped create a massmovement. On 29 May 1917, Sahodaran Ayyappan organised “Misrabhojanam”, an event in which people from all castes of Hindu community sat together and participated in a feast. This event caught the attention of Kerala and was staged at many other places as a renaissance movement. Sahodaran Ayyappan was the greatest contributor to Kerala’s political and social revolution from among the people of Cherai. He founded the “Sahodara Sangham”, which helped spread the message of Sree Narayana Guru and SNDP all over Kerala. Alongwith this organisation, a ladies wing called “Sthree Samajam” also used to function, at a time Keralites had not even thought about an organisation for women. After India’s Independence and formation of the Kerala State by merger of the three princely states Travancore, Cochin and Malabar, Pallipuram Panchayat was formed. Originally, it was a Group Panchayat consisting of Kuzhupilly and Pallipuram which consist of Cherai area.