In and around Cochin are several cities of monumental value, but step into Fort Cochin, and you are in a totally different world where time stands still. The Chinese fishing nets, the Jewish Synagogue, the Dutch palace, the Portuguese and British Architecture, all finely blend with the rich heritage of the land, intricately woven with folklore and fact. 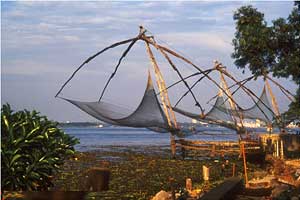 These huge cantilevered fishing nets are the legacy of one of the first visitors to Malabar Coast. Erected here between 1350 and 1450 AD by traders from the Court of Kubla khan, these nets are set up on teak wood and bamboo poles.

The best place to watch the net being lowered into the sea and catch being brought in is Vasco da Gamma square, a narrow promenade that runs along along the Beach.The square is an ideal place to idle with stalls serving fresh delicious sea food and tender coconuts. It is now an integral part of Kochi tourism and it is also tagged as one of the most photographed sights here at Kochi. 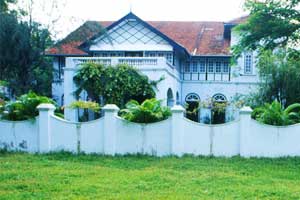 This charming Mansion was the office of Pierce Leslie & Co., coffee merchants, founded in 1862. A representative of Fort Cochin Colonial Bungalow, this building reflects Portuguese, Dutch and local influences.

Characteristic features are wood panels that form the roof of ground floor, arched doorways, carved doors and sprawling rooms. Water front verandas are always an added attraction to such houses.

A visit to this awe inspiring bungalow would definitely take you back to the by gone era.
Old Harbor House 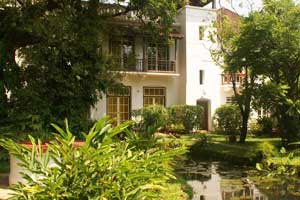 This house that was once a boat house and built in 1808 is in the possession of Carrit Moran & Co.,renowned Tea brokers, who used it as their residence.

It has now been converted into a heritage hotel and is said to be one of the oldest hotels in Kochi, that used to shelter sailors.

Here you can find a perfect blend of the Dutch and the Portuguese style of architecture. Be it the large arched entrance or the red tiled roof, each and every minute aspect of this building is sure to attract everyone who visits here. 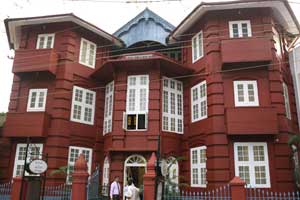 This magnificent building constructed by Samuel. S. Koder of the Cochin Electric Company in 1808 is a supreme example of transition from colonial to Indo-European Architecture. Features like Veranda Seats at the entrance, floor tiles set in a chess board pattern, red colored brick like façade, carved wood furniture and a wooden bridge connecting to a separate structure across the street are unique to this Bungalow of the 1800's.

This imposing three storied building lies in the Tower Road. The unique hanging bridge, which dates back to 1920’s, gives a birds eye view of the Rose Street. 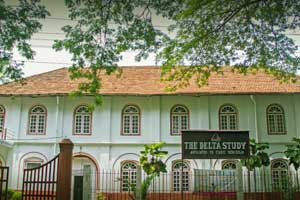 Once a warehouse, this heritage Bungalow built in 1808 is presently a high school with the same name. 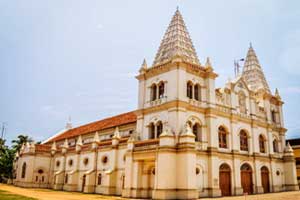 This historic Church was built by the Portuguese and elevated to a Cathedral by Pope Paul IV in 1558. In 1795 it fell into the hands of the British when they took over Cochin, and was demolished.In 1887 Bishop Dom Gomes Ferreira commissioned a new building at the same site. The Church has since been proclaimed a Basilica in 1984 by Pope John Paul II. It is one of the eight Basilicas in Kerala and one of the finest and impressive churches of India.

It serves as the Cathedral church of the Diocese of Cochin. The interiors of the church is decorated and beautified with many frescoes, murals and paintings. The artistic grandeur of this place is increased with the seven paintings of passion and death of Christ. The scenes of Via Crucis of Christ adorns the ceiling of the church. 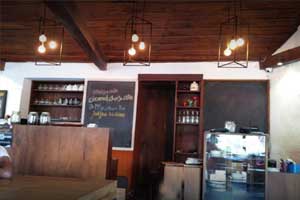 One of the earliest streets to be constructed in Fort Cochin, Princess Street with its European style residences still retains its old world charm. The best view of this quaint street can be had from Loafer’s corner,the traditional meeting place and hangout of the jovial locals of this area.

Here one can witness the grandeur of the bygone era of the British, Dutch, Portuguese and the French. Get the old world feel along with the new age vibes here at the Loafer’s Corner. One of the best things to do when you are here is shopping. You can buy things like handicrafts, clothes, jewellery and many other items. You can also get the refreshed by spending some time at the Ayurveda centers and spa. 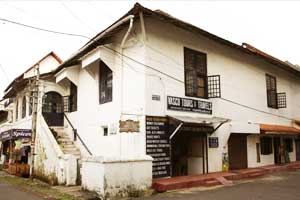 This house is located at Rose Street of Fort Kochi. The large glass paned windows open towards the St. Francis Church. Now this building is a home stay and it still continues to woo its visitors with ambience and heritage. 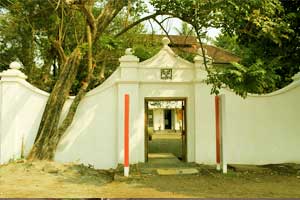 This large wooden gate facing the parade ground with a monogram (VOC) of the once mighty Dutch East India Company carved on it was built in 1740. This gate lies adjacent to the St. Francis Church and faces the four acre parade ground. 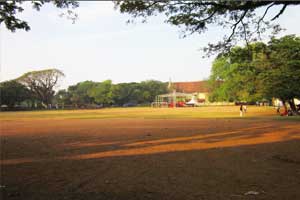 The colonists conducted their military parades and drills here. The building around the ground housed their defense establishments. This was done until 1947, when the Tricolour was hoisted.

Today, the largest open ground in Fort Cochin, the parade ground is a sports arena. It acts as a venue for many famous sporting events like Ranji Trophy and All India Rugby Football Tournament.

Though it is not as green and well maintained as it used to be, the ground, with St. Francis church on one side and the VOC gate and Cochin Club on the other, still continues to be a historic landmark of Kochi. 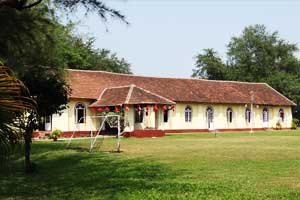 One of the four elite clubs of British Cochin, the United Club today serves two roles - as a class room for the nearby St. Francis Primary School by day and card room for the current listed members by evening. Until 1907 the building housed the offices of Fort Cochin Municipality. 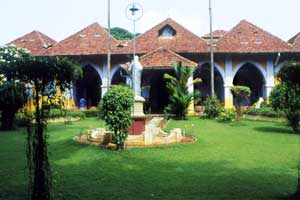 Built in 1506 as the residence of the Portuguese Governor, the Bishop’s House stands on a little hillock near Parade Ground. The façade of the house is characterized by large Gothic Arches and has a circular garden path winding up to the main entrance. The building was acquired by Dome Jos Gomes Ferreira, the 27th Bishop of the Diocese of Cochin whose jurisdiction extended over Burma, Malaya and Ceylon in addition to India and it was he who made it into Bishop’s House.

The Indo - Portuguese Museum, adjacent to the Bishop’s House showcases precious artefacts from various churches under the Cochin Diocese. 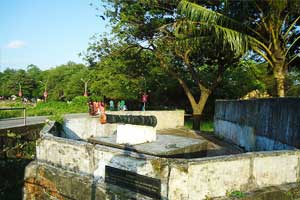 This bastion of the Portuguese in Cochin was a symbol of the strategic alliance between the Maharajah of Cochin and the Monarch of Portugal, after whom it was named.

Built in 1503, the fort was reinforced in 1538. By 1806 the Dutch, and later the British, had destroyed most of the fort walls and its bastions. Today, remains of this once imposing structure can be seen along the Fort Kochi beach. Some of the relics are kept safe in the Indo Portuguese Museum at the Bishop’s House. 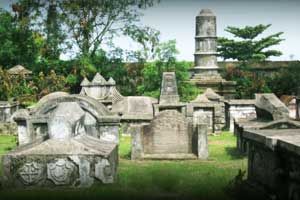 The tomb stones here are the most authentic records of the hundreds of Europeans who left their homeland on a mission to expand their colonial empires and changed the course of history of this land. The cemetery was consecrated in 1724 and is today managed by the Church of South India.

The tombs are mostly made of granite and red laterite and they do not have cross. The tombstones come in all sizes, big and small, and the inscriptions on epitaphs are written in the old Dutch script. 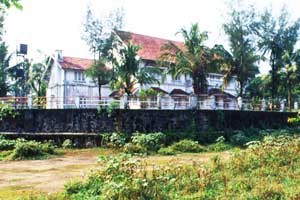 This graceful building holds within itself a reflection of the colonial era. The Bungalow was built on the site of the Gelderland Bastion, one of the seven Bastions of the old Dutch fort. Earlier known as Kunal or Hill Bungalow, it was home to the managers of the National Bank of India during the British reign. Today, the Bungalow belongs to Ram Bahadur Thakur and Co., the renowned Tea Trading firm.

This house reflects the lifestyle of the colonial era and it is complimented by green lawns with gentle sea breeze from the sea nearby. During the 17th century the building served as a look out point. The house is believed to have many tunnels, that lead to many far off places like St. Francis Church and Bishop’s House. 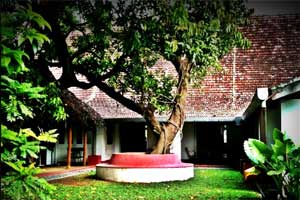 Though built around 1695 by the Dutch East India Company, David Hall gets its name from one of its later occupants, David Koder, a Jewish business man. The Hall was originally associated with Hendrik Adriaan van Reed tot Drake stein, renowned Dutch commander better known for his Hortus Malabaricus, a pioneering compilation of the flora of the Malabar coast.

This hall showcases typical Dutch architecture in all its aspects. The walls which are three foot wide and the windows with four columns are some aspects that add to the elegance of the hall. It welcomes its guests with old trees in the courtyard and the well manicured garden area. 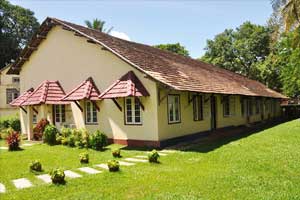 The club, found in the year 1914 welcomes its members with its impressive library and a collection of sporting trophies, is housed in a beautifully landscaped park. In the early 1900s when the club had just become operational, admission was restricted to the British.

Today, though the club retains its traditional English ambience, its rules are more liberal and the membership of 250 includes women as well. Strangely enough, alcohol is not served on the premises. The building of the club is surrounded by the attractions of St. Francis Church and Bastian Bungalow. 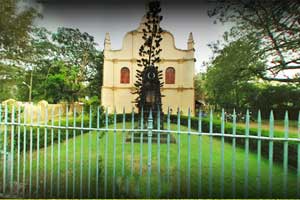 Built in 1503 by Portuguese Franciscan Friars, this is India’s oldest European Church. This was initially built of timber and later reconstructed in stone masonry. It was restored in 1779 by the Protestant Dutch, converted to an Anglican Church by the British in 1795 and is at present governed by the Church of South India.

Vasco da Gamma was buried here in 1524 before his remains were moved to Lisbon, Portugal. The tombstone can still be seen in the premises. This church was declared as a protected monument under the Protected Monuments Act of 1904, in the year 1923. 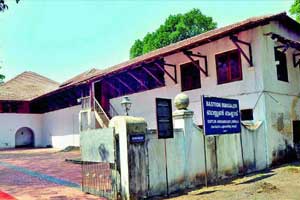 Built in the Indo-European style way back in 1667, the Bungalow gets its name from its location on the site of the Stromsburg Bastion of the old Dutch fort. The building blends beautifully into the circular structure of the bastion, has a tiled roof and a typical first floor verandah in wood along its front portion.

Though it has been said that a network of secret tunnels runs beneath the Bungalow, none have been found. Today, the Bungalow is the official residence of the Sub Collector.