Malappuram district, with its rich natural beauty and historic past, has its own tourist attractions. 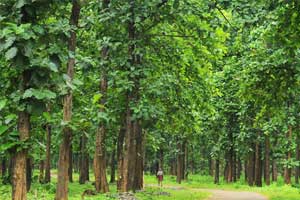 Nilambur is famous for its teak plantations. The oldest teak plantation of the world, the Conollys Plot is just 2 Kms. from Nilambur town. The plot was named in memory of H.V. Conolly, the then Malabar District Collector, who was instrumental in raising the teak plantation in the entire Nilambur area. Sir Chathu Menon, a forest officer under Conolly, took up the hectic task of planting Teak. Chathu Menon was laid to rest in the Teak garden in Conollys Plot. The oldest Teak Kannimari in the plot is a rare attraction. This plot of 2.31 Hectares, is beside the Chaliyar river at Aruvakode, where a country boat ferry is ready for visitors. 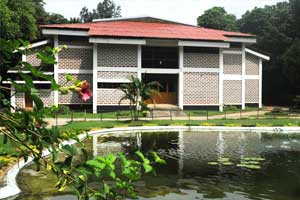 Four Kms. away from Nilambur on the side of Nilambur-Gudallur road, is the worlds first Teak Museum and sub centre of Kerala Forest Research Institute. In the Teak Museum, a visitor can have at hand information on all aspects of teak. The Museum, arranged in a two storied building, exhibits articles and details of historic, aesthetic and scientific value. Eighteen Kms. away from Nilambur is Nedumkayam where the rain forests flourish. From the wooden rest house built by the Britishers, elephants and deer can be viewed.

An elephant taming centre is also there. Half an hours jeep journey through the thick forests from Nedumkayam, leads to Mancherri, the settlement of Chola Naikas, a primitive tribe. Beyond Chaliyar river, 27 Km from Nilambur, is Valamthode, a hill top place where a perennial waterfall attracts people. This too is a tribal settlement. Road accessibility is through Kozhikode district by Areekode-Mukkam Road. Nilambur town is famous for Kovilakams where the Rajas resided and ruled the land. The Kovilakams have beautiful frescoes and artworks in wood. The forest division offices (Nilambur north & Nilambur south) are functioning from here. It is the terminus of Shoranur- Nilambur railway line and it is 40Kms. from Malappuram town. 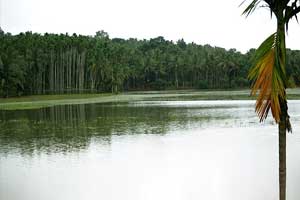 Twelve Kms. north east of Malappuram town, Manjeri is the head quarters of Ernad Taluk. It was a live centre of the National Movement. Manjeri Kovilakam was the seat of the ruling families under the Zamorins. The District Hospital and the District Court are at Manjeri . Some district offices like the District Medical Office, PWD Roads Division, Local Works division etc. are also functioning in this town. Anakkayam, 2 Kms. from Manjeri was an important centre in the 1921 mass upsurge. Anti British revolts took place from 1790 itself, in and around Manjeri. 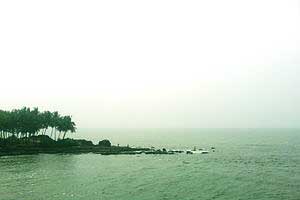 Malappuram is the head quarters of the district. It is 26 kms south east from Calicut Airport and 28 Kms north east from Tirur railway station. It was a military head quarters from ancient times. The Zamorins of Kozhikode had their sway over this place and they stationed a part of their militia here. Para Nambi, the chieftain of the Zamorin, ruled with head quarters at Kottappady in Malappuram. Malappuram Nercha, celebrated in summer, is in memory of martyrs who fought the atrocities of the militia.

The Britishers established the Haig Barracks on top of a hill, at the banks of Kadalundi river, to station their forces. The main barracks has now been turned into the seat of district administration. Main district offices are functioning here. Malappuram is the headquarters of the Malabar special Police, established in 1921.

Pookottur near Malappuram, has a place in history, where the Mopla warriors fought the British with their traditional weapons and were killed in cold blood, during the Malabar Rebellion. Panakkad, 6 km from Malappuram in Malappuram - Parappanangadi road, is an important spiritual centre for the Muslims of Kerala. 10 km away from Malappuram, between Anakkayam and Mankada, is Poonkudi Mana, famous for the traditional method of treatment of mental illness. Seminars on modern treatment and traditional styles are conducted here. Poonkudi Thalapoli is a Hindu religious festival of this place. 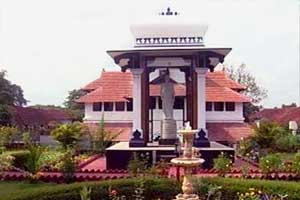 Kottakkal is a world renowned centre of Ayurveda. The Arya Vaidya Sala, established by P.S. Warrier, the well known physician and social reformer is here. People from different parts of the world come for treatment. Art and culture also flourish in Kottakkal with the patronage of Arya Vaidya Sala.

P.S.V. Natyasanghom has a unique place in Kathakali. A Kathakali school is run by the sanghom. Venkata Theva temple near the Arya Vaidya sala, is noted for its Mural paintings. Kottakkal Pooram festival attracts thousands. Connoisseurs of music, art, culture and literature of the country, participate in the cultural mela organized in connection with the pooram.

Annual seminars on Ayurveda and other branches of medicine, conducted as a part of founders day of Arya Vaidya Sala, are attended by experts from abroad also. A medicinal herbal garden, maintained by the Vaidyasala is the rare treasure. There is an Ayurveda college at Kottakkal. The Govt. of Kerala runs the only Ayurveda mental Hospital of the state, here.

Kottakkal is 12 kms. west of Malappuram. National Highway-17 passes through Kottakkal. The distance from here to Calicut airport is 13 kms., and to Tirur Railway station is 16 kms. the famous Kadampuzha Devi Temple is 10 kms. from Kottakkal, where devotees in and out of Kerala, come and pray to remove obstructions in life. 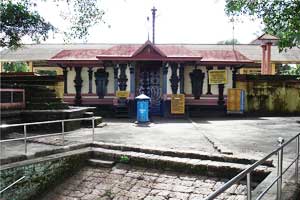 The land of ancient Mamankom, Thirunavaya is 7 kms south of Tirur. Situated on the banks of Bharathapuzha, it is a place of historical importance. In olden days, Mamankam was a grand assembly of the rulers held once in 12 years, in which one among them was selected as the emperor of Kerala. it was an enormous trade fair also. The Mamankam festival was celebrated for 28 days with great pomp and pageantry where traders from outside came in ships and barges to Thirunavaya through Ponnani port. Thus the economical importance of Mamankom was high and hence the right to conduct and control it was important.

At the end of the rule of Perumals, the right of Mamankom was with Vellattiri, the ruler of Valluvanad. Later the Zamorin of Kozhikode, took this right by force and this resulted in dispute and bloodshed between these two Rajas. Valluvanad Raja used to send Chaver warriors to flight until death, to recapture the right from the Zamorin, who would stand poised at Nilapaduthara in Thriunavaya, surrounded by a large contingent of soldiers, in every 12th year. The last of such Mamankoms, was believed to be held in 1755, when the Zamorin had a hair-breadth escape from a chaver aged 16.

The Nilapaduthara, now in the premises of Kottakkal Tile Factory, is protected by the Archaeological department. A deep well called Manikkinar,is believed to be dumped with the dead bodies of the Chaver pada. The place has three temples, dedicated to the Trimurtis, the gods of creation, sustenance and annihilation of life, according to the Hindu belief, strewn on the banks of the Bharathapuzha. The famous vedic Vidyalaya Othanmar Madom of ancient times, is on the bank of Bharathapuzha, near the Siva Temple. This madom was a centre of Aryanisation through Sanskrit and Vedic education, as Thirunavaya was believed to be the main centre where Parasurama brought and settled Brahmins.

The Palace (Mana) of Puranic fame Azhvanchery Thamprakkal is 2 kms north of Thirunavaya. Navamukunda Temple, believed to be constructed by Nava yogis on the right bank of Bharathapuzha, is an important Vishnu temple of Kerala. Pitru Tharpanam is a ritual, held here on the day of Amavasi of Karkidaka(July). Balikarma is offered by people in their wet clothes, after a dip in the river, for the salvation of sins and to appease the ancestral spirits.

A martial art festival of Kalaripayattu, is conducted during summer on the sands of dry Bharathapuzha. The famous Changampalli Kalari is near Thirunavaya. During the second week of February, a Sarvodaya Mela is conducted in Thirunavaya where the Gandhians of Kerala assemble. The Santikudeeram established by the national leader K. Kelappan, is the centre place of this mela. 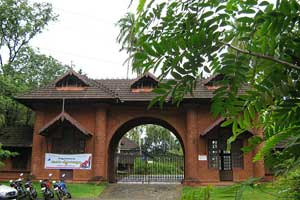 Tirur is one of the important business centres of Malappuram district. It is 41 Kms south of Kozhikode, on the Mangalore-Madras railway line. Thunjan Paramba in Trikkandiyur, 3 km away from Tirur railway station, is sacred for all who speak Malayalam. This is the birth place of Thunjuath Ramanujan Ezhuthachan of 16 th century AD, honoured as the Father of Malayalam literature. Important works of Ezhuthachan, Adhyatma Ramayanam and Harinamakeerthanam are widely recited in Kerala homes.

A memorial for the great poet has been built at Thunjan paramba, where a week long literary mela is organised in the last week of December. People in hundreds, reach Thunjanparamba with their children, to initiate them into the world of letters on the Vijayadasami day. Children are made to write on the white sands of Thunjanparamba with their fingers. Young poets of Kerala come on that day to offer their first poem. A Nuxvomica tree the leaves of which are not bitter, is a surprise at the Thunjan paramba.

South of Tirur is Chamravattom Sastha Temple, which is constructed on the banks of Bharathapuzha. Six kms. from Tirur, is Truprangode where the only temple of Kerala, dedicated to Garuda, the bird deity, is situated. Chandanakavu, the birth place of the great 16th century Sanskrit poet and grammarian, Melpathur Narayana Bhattathiri, is 10 kms. away from Tirur in Thirunavaya - Kottakkal road. A memorial has been built there for the poet, where small children are brought for their formal initiation into learning, on Vijayadasami day, as in Thunjan paramba.

Tirur-Kottayi road ends at Padinharekara, where the Bharathapuzha and Tirur rivers converge to drain into the sea. This place is noted for migratory birds, gathering in thousands during February - April. Tirur was to witness the ill-famed Wagon tragedy of the 1921 rebellion. Seventy prisoners sent to Pothannur, filled up in an airtight goods wagon from Tirur railway station, died of asphyxiation. 4 of them were Hindus. The wagons were returned with the dead bodies to Tirur. These bodies were laid to rest in Khabristan,at the mosque nearby. Tirur Municipality has built a town hall in memory of the Wagon Tragedy.