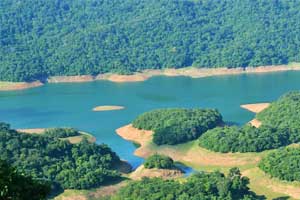 You can do boating in the reservoir.Tickets can be purchased at the eco-tourism centre. You will be taken to the boarding point in a battery-powered van. Many people can ride together in the boat. It is a pleasant experience to sail through the reservoir which is the longest in the State. 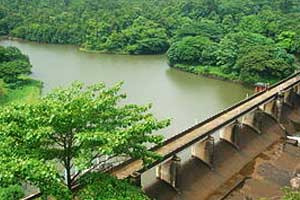 Thenmala (Parappar) Dam is a centre of attraction at Thenmala, the pioneer ecotourism destination. Built under the Kallada Irrigation and Tree Crop development project, it is the second largest irrigation project in Kerala (India). This dam came into function in the year 1961. The dam is situated in the foothills of the Western Ghats and hence with its surrounding greenery, makes it a picturesque location.

The dam impounds the longest reservoir in the State. Water from the reservoir is now used for power generation also. This dam is located at a distance of 68 kilometers from the town of Kollam. 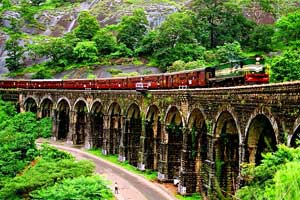 In the Metre Gauge Railway at Thenmala, visitors can experience the exciting travel through the rare metre gauge railway. This railway line is popularly known as the Kollam - Sengottai Branch Line. This line connects Kollam Junction of Kerala and Sengottai of Tamil Nadu.

This is credited to be the first railway line during the time of erstwhile state of Travancore and hence is more than a century old. This railway line contributed to the plantation economy development and tourism development of Thenmala. While taking journey in this route you can get to see the 13 Kannara Bridge and the Aryankavu - Puliyara (Kottavasal) tunnel. 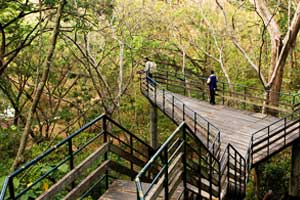 This centre provides the tourist all the needful assistance and facilities to experience the Eco tourism around Thenmala. It is India’s first planned Eco tourism destination. Thenmala being a location filled with forests and rubber tree plantations, was selected by the World Tourism Organisation as a premium eco-friendly projects of the world. The Shenduruney Wildlife Sanctuary forms one of the important aspects of Thenmala Eco Tourism.

The region has been divided into Culture, Leisure, Adventure zones to explore every destination spot. Boating, Canopy Walkway, Musical Dancing fountain, Sculpture garden,etc are some of the sight seeing options. 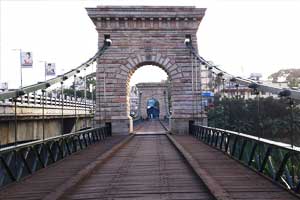 Punalur Suspension bridge is 45 kilometers from Kollam on the Kollam-Shenkottah railway line and is also linked with Kollam by road. The Suspension bridge across the Kallada river erected in 1877,is the only one of its kind in South India and it is 400 ft long.

It is the oldest and the first motorable bridge in South India. It was built by Albert Henry. The main reason that this bridge was built was to prevent the wild animals from crossing from the forests of Kattupathanapuram to the town.

A concrete bridge has been constructed nearby and now the suspension bridge is only of archaeological interest. 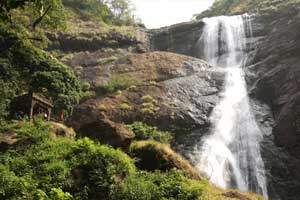 The Palaruvi Falls is situated at a distance of 16 kilometers from Thenmala towards Shenkottah and drops down to 300 feet in height amidst tropical evergreen forests, providing a beautiful feast for the eyes. The name Palaruvi means Milky Stream and just as the name suggests the waterfalls flows in the same manner.

The Palaruvi Falls is the 32nd highest waterfalls of India. The nearby woods add into making this place a beautiful picnic spot. The cool waters of Palaruvi are great for taking a dip in and getting refreshed.