Introducion
Kollam, also known as Quilon or Desinganadu, is the place which takes the credit for being the hub of the countrys cashew trading and processing industry. Affording an impeccable blend of scenic surrounding, tradition and hospitality, Kollam is often referred to as the dreamland of Kerala.

Kollam is considered as one of the oldest ports on the Malabar Coast and has long been drawing the attraction of international countries.The town served as the leading spice market in  medieval and modern . The name of the place that is Kollam, is believed to have been derived from the Sanskrit word Kollam meaning pepper. The present town area is believed to  have been built by a Syrian merchant, Sapir Iso, in the 9th century A.D.

The first foreign community to settle in Kollam were Chinese. Trade relations were established as early as 14th century.The first among the Europeans to land in this prosperous town were Portuguese, followed by Dutch and then British. Kollam in the bygone days was famous for its palaces and the place was sometimes called as the City of Palaces . The region also has a reputation for cashew plantations.

Gateway to backwaters
Kollam is an old sea port town on the Arabian coast, standing  on the Ashtamudi lake. In the ancient times, Kollam  had a sustained commercial reputation around the world. Fed by the Chinese trade, it was regarded by Ibn Batuta, as one of the five ports, which he had seen in the course of his travels during a period of 24 years, in the 14th century AD.

The eight hour boat trip between Kollam and Alappuzha is the longest and most enchanting experience on the backwaters of Kerala.

The district also has some interesting historic remnants and a number of temples built in the traditional ornate architectural style.Among the towns in Kerala, Kollam is one town thats famous for its antiquity!During ancient times, Kollam was a renowned international trade centre ... for the port of Kollam was frequented by Phoenicians, Persians, Romans, Arabs and Chinese.Also, famous travellers like Marco Polo and Ibam Batuta have acclaimed the historical importance of Kollam as a commercial town!

Capital of Venad
The capital of a powerful kingdom called "Venad", Kollam came into prominence in the 9th century AD. As cited by some historians, the Malayalam era - called the Kollam era - was established by Marthanda Varma, the ruler of Kollam in 825 AD.

Kollam also has some notable importance in Indian history during the British Raj - it was the nerve centre of the rebellion organised by freedom fighter Veluthampi Dalava.Speaking of culture, it was in Kollam where Ramanattam - the dance form of Kathakali originated!

Today, Kollam is one of the major industrial and commercial centres of Kerala ... and also the hub of Keralas cashewnut industry. 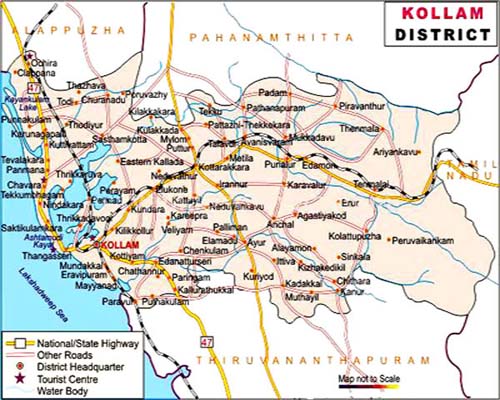