Thrissur is known as the cultural hub of kerala. It has a large number of historic temples such as Thiruvambady temple, Vadakkumnatha temple and Paramekkavu temple, and two well known churches the Our Lady of Lourdes Metropolitan Cathedral and the Our Lady of Dolours " New Church " Basilica (the biggest in South Asia ). Thrissur Pooram, a spectacular festival in South India and known as mother of all Poorams draws thousand of people from all over the world. The city having a population of approximately 3.2 lakhs and an area about 66.15 sq.km, witnesses, many cultural and political turmoil.

Thrissur gained prominence under the reign of Raja Rama Varma who is referred as Sakthan Thampuran, in 1790. It is Sakthan Thampuran to whom the modern Thrissur is ever indebted, because it was he who rebuilt Thrissur from the destruction caused by the attacks of Tipu Sultan’s army.  The Sacred land has been visited by all religious gurus like Swami Vivekananda, St Thomas and Sree Narayana Guru who fought against all caste system which prevailed then. Kerala Sahithya Akademy, Sangeetha Nataka Akademy and Kerala Lalithakala Academy are head quartered at Thrissur, making the epithet cultural capital of Kerala more meaningful. Kerala Police Academy spread over an area of 348 acres and  built at a cost of Rs. 220 million, is designed to have a capacity of training 1950 trainees of various ranks (1500 constables, 400 officers and 50 women constables) at a time, which is one of the highest in .

Economically Thrissur is also referred as the golden capital of kerala since lumpsum business of gold is done every year in the city. Almost every major jewellery shop in  Kerala has its branches in the city. It is the major gold ornament designing and construction center in South India . Thrissur is also known as the financial hub of Kerala. It is the Head Quarters of three major scheduled banks, South Indian Bank, Catholic Syrian Bank and Dhanalakshmi Bank Ltd. There are over 4200 chit companies around the city doing roaring business. The other industries are diamond polishing and tyre moulding. 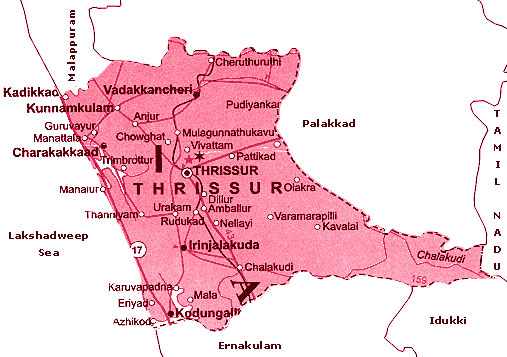