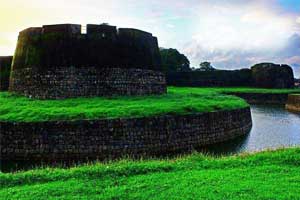 Unlike the other forts of the country, the Palakkad Fort, also known by the name of Tipus Fort was built to enhance communication between Palakkad and Coimbatore. The fort was originally constructed by Hyder Ali, Tipus father. However it fell into the hands of the British in 1784 and Zamorins in 1790.

Today, the fort is under the protection and care of the ASI (Archaeological Survey  of . The fort is not only worth visiting because of its historical importance, rather it has a pleasant ambience that encourages you to take a walk in the evenings. Moreover, the Children’s  parks ensure that the place is full of cheerful and enthusiastic voices. There is also an auditorium and a small museum in the fort. 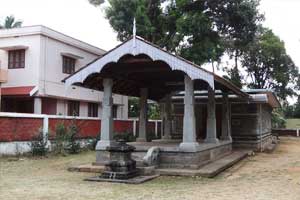 This temple is located just 3 km from the city centre on the banks of the Kalpathy river and is believed to be around 500 years old. The builder of the temple is supposed to be the Jain head of the time who went by the name of Inchanna Satur and is dedicated to Jain sage, Chandranathswamy.

Inside the temple, the main division (1st one) contains an idol of Chandranathswamy while the other division has idols of Vijayalaxmi and Jwalamohini (in the 2nd division), Rishabhanathan (in the 3rd division) and the Parswanathan (in the 4th division).   The interior of the temple is marked by simplicity, so you have plain granite walls and an unadorned main altar. There was a time when the Jain population in the town consisted of 400 families. The number is much less now, still this temple commands the same respect as previously. The temple is open from 7 to 10.30 am and later from 5 to 7 pm. 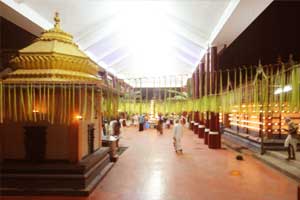 This temple can be visited on your way to the Jain Temple in Jainmedu. The presiding deity here is Bhagavathy, an incarnation of Kannagi, the heroine of Tamil epic Silappadhikaram. According to legends, it is believed that Kannagi, after burning the city of Madurai had taken rest under the fig tree in Vadakkanthara. An idol was formed in that place and since there was no roof above her she is also called Thirupurakkal Bhagawathy.

In the evening, sharp at six, a small firework is set off as per the tradition (which can be witnessed in most of the other Keralite temples as well). The timing of the fireworks remains the same all the time, so much so that the people around have no qualms in setting their clock on hearing the sound of the crackers. 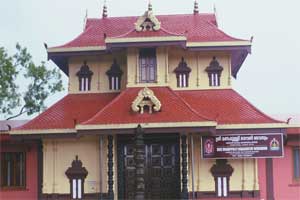 This is the second of the two most important Bhagavathi devi temples in Palakkad. The temple is believed to be 1200 years old. The idol here is swayambhu (self created) and is found on one side of the Sreekovil. The main idol of the temple was installed at a much later date. It is located on the Palghat - Chittur road and is very near the national highway.

The Manapullikaavu Vela Festival is the main festival of the temple. This is celebrated during the last week of February or the first week of March. The temple is open between 6 to 10.30 am and 5 to 7 pm. 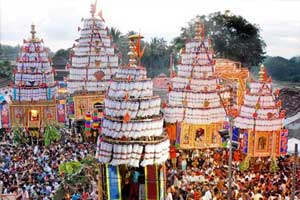 Kalpathy Agraharam or the Brahmin Village is one of the most notable features of Palakkad. It was recently given the status of being the ‘First Heritage Village’ of Kerala.

The Vishwanathaswamy Temple is located on the southern banks of river Kalpathy and is around 3 km from Palakkad. The temple, dedicated to Lord Shiva in 1425, is not a huge structure, nevertheless it has a huge flagpole which is put to good use during the annual Chariot festival.

The festival of Kalpathy Ratholsavam, a huge crowd puller, continues for seven days and has people competing with each other to pull the elegantly beautified chariot supposed to be made sacred by the presence of Lord Shiva. On usual days, the temple is open from 5 to 11.30 am and then from 5 to 7.30 pm.

This temple lies past the Kumarapuram agraharam, between Kalpathy, Ambikapuram and Chokkanathapuram, on the banks of river Bharatapuzha. The Kumarapuram Temple was once a hotspot for vedic learning. The deity at the temple, Lord Prasanna Venkatachalapathy has his consorts, Alamelu and Mangalambal accompanying him.

Venkatachalapathy is equated with Lord Balaji of Tirupati and even the rites performed here are similar to the ones carried out at Tirupati. The other deities present here are Maha Ganapathi, Lord Ayappan and Lord Subramanyan. The temple is open between 6 to 10.30 in the morning and 5 to 7 in the evening.

At a distance of 8 kilometers from the main town of Palakkad is the Emoor Bhagavathy Temple. This temple is also known by the names of Hemambika or Kaipathy Ambalam or Kallekulangara Bhagavathy Temple. The deity is worshiped in three forms here - as Sarasawati in the morning, as Lakshmi in the noon and as Durga in the evening. Navarathri is celebrated with much fervour in this temple.

An interesting legend associates itself with the temple. According to it, Goddess Bhagavathy agreed to appear before a holy man but disappeared when she saw a number of people waiting for her. The holy man had, in his excitement, spread the news throughout the village which resulted in devotees thronging in large number. However, the devotees did see her upraised hand as she was emerging from the temple. Hence giving the temple the name of Kaipathy or palm of the hand. 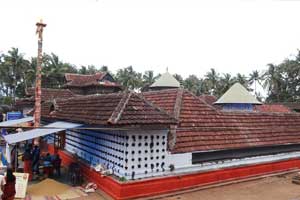 This Shiva Temple is in the southern part of Palakkad. It is located at a distance of about 6 kilometers from the main town. It is the place where you can find the biggest of ‘Mizhavu’, an instrument commonly used in the art forms of Chakyarkoothu and Kutiyattom.

According to the legends, an army of Gods worked a whole night and tried to completed the outer wall of the temple. But they were not able to complete it as the day dawned. Later on, however, the work left undone by Gods could not be completed by humans and hence the wall remains unfinished till date. By the night the 4000 odd lights in this wall is lit up and this is a sight worth watching.

The main festival celebrated in the temple are Mahashivarathri and Karthikapoornima. The temple is open from 6 am to 12 pm and then from 5 pm to 7.30 pm. 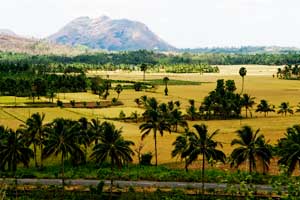 Gramam of Palakkad traces its history to the love story of a Kochi Prince who fell in love with a tribal girl of Palakkad. He was banished from his kingdom and the brahmins of Kochi refused to formalise the ceremonies when he settled in Palakkad. The prince did not give up and requested the brahmins from Tamil Nadu to oblige him. They did so and he settled down in Palakkad.

The area which his people inhabited and its surroundings came to be known as gramam or agraharam. The gramam today encompass the areas of Kalapathy, Kumarapuram, Ramanathapuram, Ambikapuram, Chokkanathapuram. There are around 35 families that still follow the customs of the Tamil brahmins, viz., vedas and shashtras are passed down verbally from one generation to another. 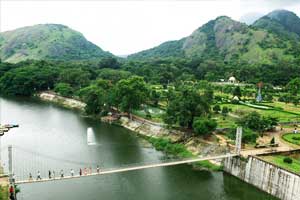 Malampuzha has something to offer to every kind of visitor. There is a wonderful rose garden with 100 species of roses for you to savour, a snake park with a large variety of reptiles to send a chilly sensation down your body, a ropeway ride at a height of 60 feet to view the garden from above, a fancy park with as many as 20 ride options and a KTDC Garden House offering pedal boats, motor boats, row-boats and water scooters for a trip round the reservoir.

If none of the above interests you, then you can simply have a look at the sculpture of the bare bodied Yakshi (demoness) with the head flung back and raised fisted hands positioned close to the ears. Malampuzha is an ideal picnic spot in every sense and is just 14 km from Palakkad. 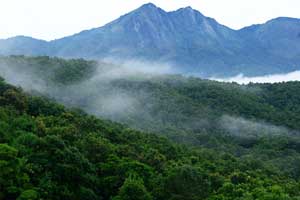 The Silent valley National Park is highly popular in the state of Kerala, it being one amongst those that are untouched by the passage of time. Its topographical seclusion ensures that the area remains uninhabited and continues to preserve the flora and fauna that house it.

Visitors get  permission to explore a limited area and overnight stay is discouraged.Special permission needs to be sought from the Wildlife Warden for this purpose. The park is located on the Kundali Hills of Western Ghats , 65 km north east of Palakkad. 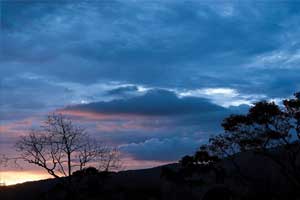 54 kilometers south of Palakkad is Nellliyampathy, a hill station perched at a height of 4600 feet above sea level. The small town is perfect to soak in the magical beauty of hills, coffee, tea and orange plantations. On the way you can stop by the Pothundy Dam and relish in the beauty of the dam or go on a boating ride.

At a distance of 8 kilometers from Nelliyampathy is the viewpoint of Seetharkundu. This place gives you an amazing views of the valleys and cities below. It is believed that Lord Rama, Sita and Laxmana, took a rest here during their exile. Another notable location of Nelliyampathy is the Kesavan Rock, the place where Mammootty starer Moreover, there are also opportunities to explore the dense forests and sight some exotic animals. 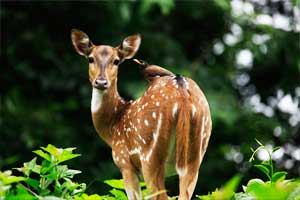 The Parambikulam Wildlife Sanctuary, 47 kilometers from Palakkad is an excellent place to get a good sight of elephants, gaurs, chitals, sambhars, deer, Nilgiri langurs, wild dogs, leopards and not to forget, tigers. The park occupies an area of 277 sq km between Anamalai hills and Nellliyampathy at a height of 980 - 4600 feet.

There are three dams, Parambikulam, Thunacadavu and Peruvaripallam, within the sanctuary where you can have the pleasure of boating amidst beauty. This place is under the consideration of UNESCO to make it a World Heritage Site. Other than the wildlife this sanctuary is also home to indigenous tribes of Kadar, Malasar, Muduvar and Mala Malasar. It is the people from these tribes who are employed as guides for treks and safaris. 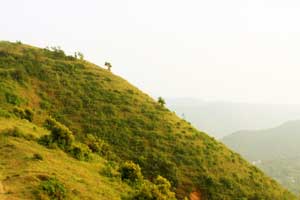 Attappadi, the mountain valley, is located below the Nilgiri Hills of the Western Ghats. It comes under the category of reserved and protected forests of India. This valley is famous for its population of tribal people mainly Irulas and Mudugars.

The place is also perfect to enjoy the scenic beauty of mountains, rivulets streams and forests. The Shivalinga at the Malleshwaram peak is highly revered by the tribals and the festival of Shivarathri is celebrated with much enthusiasm. The Goat Farm of Attappadi is where you can find a breed of goats called Attappadi Black.

Shopping
Palakkad has quite a good number of options for shoppers. There is a big bazaar (Valiya Angadi) where shops sell items like traditional bells, peacock vilakkus, thooku or hanging villakus, nilavillakkus and utensils. Tranvancore sarees, Kerala souvenirs and jewelleries are other options for shoppers. Infact, after Thrissur, it is Palakkad that has the highest number of jewellery shops. You can have a look at the new designs and also pick up the ones you like.