Places to Visit in Trivandrum 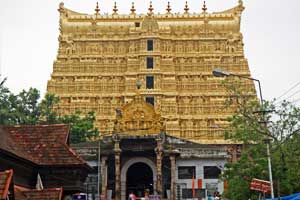 Dedicated to Lord Vishnu, the temple is a blend of the Kerala and Dravidian styles of architecture located inside the East Fort. One among rare Vishnu temples in, the presiding deity here is of Lord Vishnu reclining on Anantha the Serpent.

The temple is a place for art lovers and is also known for its mural paintings and stone carvings. 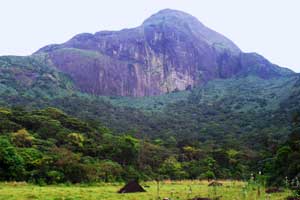 Agasthyakoodam is the second highest peak in Kerala and is also a part of Sahyadri range of mountains, at a height of 1890 metres above sea level. Teeming with wildlife, the forests of Agasthyakoodam abound in rare medicinal herbs and plants and brilliantly hued orchids. A bird watchers paradise, this legendary mountain is accessible by foot from Kotoor, near Neyyar Dam, as also from Bonacaud. The season from December to April is advocated for trekking. 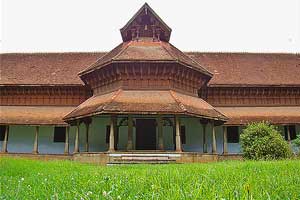 The rare specimen of workmanship in the traditional Travancore style of architecture also known for exquisite wood carvings was built by Maharaja Swathi Thirunal Balarama Varma - the King of Travancore, who was a great poet, musician, social reformer and statesman. The palace museum displays paintings and various priceless collections of the royal family and is located near the Sree Padmanabha Swamy Temple. 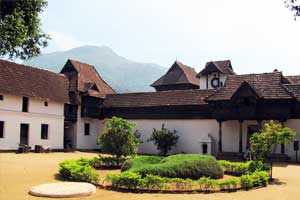 The splendid palace is situated at Thuckalai, on the way to Kanyakumari which once the seat of the erstwhile rulers of Travancore. This is a well preserved wooden palace, a glorious testimony to the traditional Kerala School of architecture. The extraordinary murals, exquisite floral carvings and the black glossy granite floor have withstood the test of time. 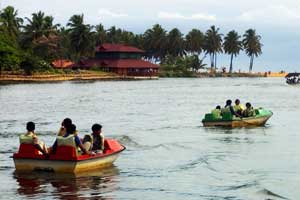 This picnic spot, where the Veli Lake meets the Arabian Sea , offers boating facilities. Pedal boats can be hired to explore the charms of the lagoon in a leisurely manner. For a quick ride over the waters, speedboats are available for hire. Children enjoy climbing over the huge sculptures which dot the landscape. 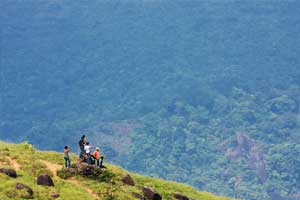 An idyllic hill station with winding pathways and cool, green, wooded environs, Ponmudi is located 915 metres above the sea level. Along with a variety of beautiful mountain flowers, exotic butterflies, small rivulets, springs and the deer park nearby, this hill station also has excellent trekking trails.

Ponmudi or the Golden Peak is a serene and breathtaking hill station located in Thiruvananthapuram, Kerala, India.

Ponmudi is a part of the Western Ghats mountain range, running parallel to the Arabian Sea. The 22 hairpin turns along the narrow and short route from Trivandrum, makes the journey to Ponmudi a scenic, serene and a thrilling travel experience. 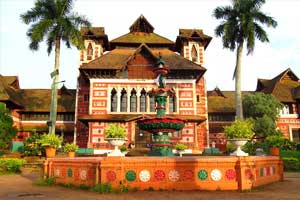 The Napier Museum is located at Thiruvananthapuram which has a good collection of bronzes, ivory carvings, ancient musical instruments and life-size figures of Kathakali dancers. The art collection at the Sri Chitra Art Gallery contains paintings of the Mughal, Tanjore and Rajput schools and a special section, devoted exclusively to the paintings of Raja Ravi Varma. There are, also, works of art from , Bali, and . The Zoological Gardens are, said to be, among the well-planned zoos in Asia . The Botanical Garden within the zoo consist of almost every tropical tree existing. The Observatory, located on the highest point of the city, is one of the impressive architectural landmarks of Thiruvananthapuram. 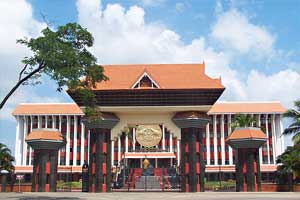 Located at Palayam, this is the new building where the Legislative Assembly of Kerala located.

With its towering dome, exquisitely carved galleries, ornate teak panelling and ceiling, combined with the most modern acoustic treatment and state-of-the-art sound systems, the hall is a beautiful blend of classical grandeur and modernity. 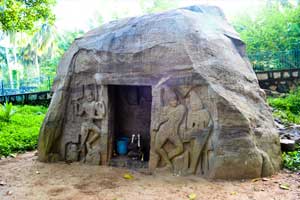 There are rock cut sculptures of the 18th century in the cave temple at Vizhinjam. The granite cave here encloses a one-celled shrine with a loose sculpture of Vinandhara Dakshinamurthi.

The outer wall of the cave depicts half complete reliefs of the Hindu God Shiva with Goddess Parvathi. 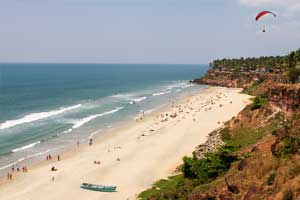 Varkala is a land of  seaside resort and spa. It is also an important Hindu centre of pilgrimage. The final resting place of the great social reformer, Sree Narayana Guru, is near Varkala, atop a hill called Sivagiri. High cliffs with mineral springs rise majestically from the coastline. According to a myth, sage Narada was approached by a group of mendicants who confessed to having sinned. Narada threw his valkkalam(cloth made of the bark of a tree) into the air, and the place where it landed was subsequently named Varkala. The mendicants were directed by Narada to offer their prayers in the newly created place by the seashore. The place where they prayed for redemption, came to be known as the Papanasham Beach ( Papanasham means redemption from sins). The 2000 year old Sree Janardhana Swamy Temple and the Nature Care Centre are the two main attractions here.

Top
How to Reach Thiruvananthapuram