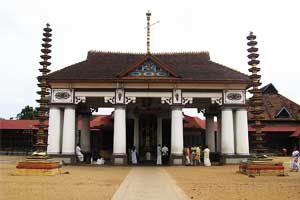 A temple with a thousand legends, the Vaikom Temple, Kottayam is a must-visit while on a tour to Kerala. Dedicated to Lord Shiva, the temple is one of the most famous pilgrimage centers in Kerala, thronged by the faithful all through the year. Arguably the oldest Shiva Temple in the world, the Vaikom Temple in Kottayam also has a number of stories of India’s struggle for freedom attached to it, which has further helped the temple to become one of the major tourist attractions of Kottayam.

The architecture of the Vaikom Temple, Kottayam spellbinds all the visitors to the land with a charm that is truly divine. Surrounded by a courtyard that stretches to almost 8 acres, the boundaries of the temple are marked by four Gopuras or towers.Facing the East, the temple is easily recognized by its Golden Flagstaff, which flows proudly, welcoming all the devotees to the temple.The temple has been patronized by a number of well-known personalities over the years, a celebrated list which includes names like Parasuraman (the incarnation of Maha Vishnu), Vyaghrapada Maharishi, Srimad Adi Shankaracharya, Villwa Mangalathu Swamiyar and a number of others.

Vaikom is one of the oldest towns in Kottayam district due to its involvement in the pre independence struggle.During the freedom struggle of India Vaikom Satyagraham against untouchability started here in 1925 wherein Mahatma Gandhi took an active part. Spiritually the city of Vaikom is known as the City of Shiva or Vaikathhapan. Vaikom Mahadevar Temple is dedicated to Lord Shiva and is known as Annadanaprabhu in local language.Pilgrims flock to the shiva temple during the Sabarimala season and Vaikathu Ashtami festival which is celebrated with great enthusiasm in February-March and in November and December.

Legend
The temple at Vaikom was established when the demon Khara of Ramayana, a great devotee of Lord Shiva set one shivalingam on the ground which got attached to the place. According to legends Lord Shiva was worshipped by Parasuram also. The Vaikom Mahadeva Temple is locally known as Thekkan Kashi or Dakshina Kasi which means Southern Varanasi.The spectacular attribute of this temple is the famous elephant parade. The offering of food or prathal to the devotees since ancient times is the oldest custom followed here. Lord Shiva is worshipped as Dakshinamurthy, Kiraata Murthy and Satchitananda murthy during morning or panthirati pooja, noon or uchcha pooja and evening respectively.

Vaikom Mahadeva Temple has an oval chamber which is covered with copper plates and the roof is crowned with a golden kalasam (dome). The temples engraved wall painting is 15 and 18 centuries old. The Mukhamandapam is in the front of the oval shaped chamber. A visitor can have a view of the Nandi (vehicle of shiva). The wall is decorated with lamps on a wooden framework lined together.The artistry involved is remarkable.