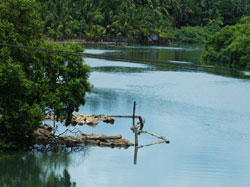 Kozhikode as an adventure destination was once the capital of the powerful Zamorin Dynasty. Its historical importance also stems from the fact that it was in the port here that Vaso-da-Gama landed in 1498. Once a prominent trade and commerce centre of British Malabar, Kozhikode in Kerala today greets visitors with its ancient monuments, lush green country sides, serene beaches, historic sites, rivers, a unique culture and a warm, friendly ambience that make it a much sought after destination.Besides, Kozhikode charms visitors as an adventure spot.On a trip to Beypore, a prominent port and fishing harbour of ancient Kerala, one can witness the first hand the making of Uru (the Arabian trading vessel).

The district also prides itself (Kallai) on being the Worlds second timber trading center. The many museums and galleries, house wide collection of tools and devices used by the ancient tribal communities of Kerala, ancient mural paintings, antique bronzes, old coins, souvenirs and models of monuments await the adventure enthusiasts in Kozhikode. Travellers will love Kakkayam, Thusharagiri and Vellari Mala all with their picturesque locations and thriving wildlife which are ideal adventure spots for picnicking as well as trekking. The adventurous visitor in Kozhikode will also enjoy the bird sanctuaries, the waterfalls and the village ambience of this beautiful district.

For tourist attractions in and around Kozhikode, log on to kozhikode.com