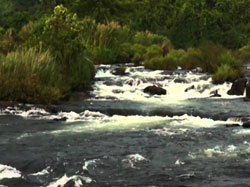 Although not a popular waterfall destination in the exact sense of the word, water and rocks together make for a picturesque scene at Panieli Poru, a little known spot on the eastern tracts of Ernakulam district. Situated along the Malayattoor forest tracts, 20 km from Perumbavoor, the place casts an enchanting spell that mesmerises the visitor. The Periyar gushes along the rocky terrain here.The rivulets of the Periyar, having separated upstream, join hands at the spot and continue the onward journey. The flowing water makes a symphony along with the chirping of the birds in the nearby forest. It is indeed an alluring locale for those who have a love for natures splendour.

Panieli Poru waterfall is a tourist spot in the Ernakulam region of Kerala, India caused by a natural bottleneck in the flow of the Periyar River due to rock formations.The river, which is shallow and wide until just before the rock formations, is forced to flow through some narrow crevices in the large rocks and to flow over shallower rocks, which increases its momentum and creates a great deal of turbulence. Nevertheless, this turbulence will not be visible on the surface.

The crystal clear water at Panieli Poru waterfall looks shallow and tempting, but there are many dangerous spots within the rocky bed. Warning signals and boards have been put up at a few of such spots. The Vana Samrakshana Samiti, an initiative of the Forest department and the district administration, in association with other departments and the local people, has drawn up a plan to streamline the tourism activity here.

The flowing water here has medicinal properties derived out of the rich herbal presence in the area. Many visitors swim in the water for hours together. Lifebuoys are being deployed to ensure the safety of the adventurous lot.

A wooden watchtower, which could double up as a tourism project, is under construction here. The ideal time to visit Panieli Poru waterfall is between November and May.Even during the monsoon season there are found to be many visitors.During peak season, about 400 people visit the place daily. The Malayalam word `Poru means fight. It is the place of fight between rocks and water, hence the name.

For details on the commercial capital of Kerala, log on to ernakulam.com