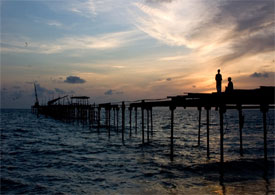 Alappuzha beach is quite a popular tourist spot in Kerala, known to provide relaxation. The pier, which extends into the sea here, is around 140 years old. Blessed with natures green beauties such as lagoons, vast lakes and numerous fresh water rivers, Alappuzha is a natural wonderland of Kerala state. The Alappuzha (Alleppey) beach is spectacular.Known as the Venice of East, with the Arabian Sea in the West and a large number of lakes and lagoons crisscrossing it, Alappuzha is one of the most beautiful districts in fascinating Kerala. Famous for a horde of things, Alappuzha stands out for its breathtakingly amazing beach. This beach along with its famous backwater houseboats and boat races attracts thousands of tourists every year.The beach is is one of the most popular picnic spots in Alappuzha.

Earlier known an Alleppey, the place is now famous for the Snake Boat Races held here every year around the time of the Onam festival. The giant snake boats called Chundanvalloms, race against each other for the prestigious Nehru Trophy. Crowds gather in huge numbers to witness this race, which is also a famous event amongst the tourist population visiting fascinating Kerala,south India. Today, Alappuzha has grown into an important beach and backwater tourist centre, attracting several thousands of foreign tourists each year. Alappuzha is also famous for its marine products and coir Industry.

Holidaying on the beaches of Kerala, especially Alappuzha can be great fun.Sumptuous sea food can be savoured at the beach.The Ayurveda, yoga and meditation centres near Alappuzha beach are great tourist attractions.