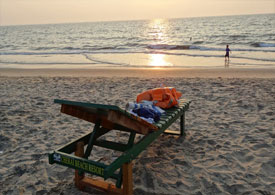 Papanasam beach at Varkala in Kerala is a perfect place to watch the sunset or relax gazing at the horizon. This beach in Varkala is covered with coconut palms and small restaurants that mushroom during the season. This beach is bordered by high cliffs. Right below this cliff is the 500 -metre stretch Papanasam beach of Varkala.

Compared to other prominent beaches, Varkala is fortunate in that it is less crowded, has fewer number of shops and beach sellers and still lesser amount of commercialization. Here one could swim, play cricket, volley ball and even manage to practise yoga.And If you are that lucky, you get a rare chance to sight a naughty dolphin off the sea-shore at Varkala beach.

Papanasam beach at Varkala is important for the Hindus. They come to drain the mortal remains of their dead relatives. Consigning the mortal remains of the dead relatives in the waters of a pilgrim centre is considered a sacred act by the Hindus, and it is a way for redemption from sins.This Hindu ritual also known as vavu bali is performed on the Varkala beach on the new moon day of the month of “Karkkidakam’ (Malayalam Era).

The town of Varkala, situated at a distance of 45 km from Thiruvananthapuram city and 37 km from Kollam,besides being famous for its beach, has remained a Hindu pilgrimage centre since the 12th century.There is also a famous 2000 year old temple which has a Vishnu shrine here.

For further details on The Pilgrimage site of Varkala, log onto varkala.com