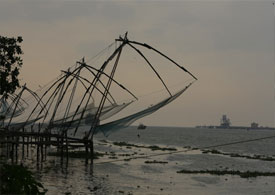 The beach destination of Fort Kochi is located 12 kms from Ernakulam city.A leisurely walk through the lanes of the city is the best way to discover historic Fort Kochi. An obscure fishing village that became the first European township in India, Fort Kochi has an eventful and colourful history. The town was shaped by the Portuguese, the Dutch and later the British. The result of these cultural interfaces are seen in the remains of the Indo-European architecture in the historic and beach destination of Fort Kochi.

The Chinese fishing nets that line the sea-front of the beach destination of Fort Kochi exhibit a mechanical method of catching fish by local fishermen in Fort Kochi. Said to have been brought from China by traders of Kubla Khans court, they are used at high tide by the fisherfolk off Fort Kochi beach.

Mattancherry is a man-made island near Fort Kochi created from the material dredged while deepening Kochi Port. It is situated between the main land Emakulam and the old town Mattancherry and separated by the backwaters. Willingdon Island is an important part of Kochi. The Govt. of India Tourist Office, the Southern Naval Command Headquarters, the Seaport, Naval Airport, Railway Terminus, Customs House, Kochi Port Office etc are all located in this island.

Bolghatty Palace is situated in Bolghatty Island, a narrow palm-fringed Island easily accessible from the mainland. The Palace was built by the Dutch in 1744. Later, it became the seat of the British Residency and today this has been converted into a hotel run by the KTDC.

Situated In Mattancherry, the famous ancient Jewish Synagogue, the first of its kind in the country, was built in 1568 AD. The Great Scrolls of the Old Testament, the copper plates in which the grants of privilege made by the Kochi rulers were recorded and the exquisite Chinese hand-painted tiles are of interest here. Timings: 1000 hrs to 1200 hrs and 1500 hrs to 1700 hrs. Closed on Saturdays and Jewish Holidays.