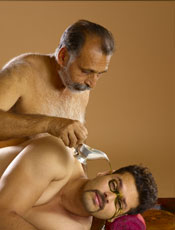 The unique system of healing in Ayurveda believes in not only treating the ailments of the body but those of the mind as well.The most amazing part of ayurveda is that it uses almost all methods of healing like yoga, meditation, purification, astrology etc and incorporates herbs, gems, colours, massages, diet, exercise and so on, which can be individually used to heal a number of ailments in a suffering person.

According to Ayurveda everything in nature -the body, foods, season etc are all composed of five elements originally called panchmahabhuts. These are Earth, water, Fire, Air & Space. Practioners or Vaidyas group these five elements into three categories called Doshas. These are Vata, Pitta and Kapha. They believe that an imbalance in these doshas causes illness. Ayurveda believes is treating the sick and restoring the health of ailing persons.

Related to Ayurveda is Naturopathy, a scientific system of healing stimulating the inherent power to regain health with the help of the same five elements mentioned in ayurveda: Earth, Water, Air, Fire and Ether. Naturopathy is a call to Return to Nature and to resort to simple ways of living in harmony with the self, society and environment. Naturopathy is an art science of healthy living and drugless system of healing based on a well founded philosophy. It has its own concept of health and disease and also principles of treatment.

For more on ayurveda in the beach destination, log onto kovalam.com