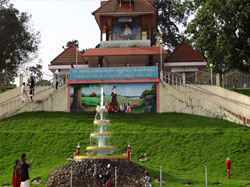 Bharananganam is a panchayat in Kottayam district of Kerala, covering an area of 27.04 square km.The population is around 17,000. This place has become a major pilgrimage tourist destination ever since the canonization of Sr. Alphonsa of this place, by the Pope at Vatican. The womens college at Palai is named after St. Alphonsa. This college is famous for its achievements in sports apart from academic excellence. It has produced a few Olympians too. The other pilgrimage places around Bharananganam are the churches at the native place of St. Alphonsa at Kudamaloor and Muttuchira which are visited by thousands of pilgrims.

The Bharananganam church which is 1000 years old is also known as Anakkallu church. This place also talks of stories which relate to the legendary Pandavas. It is believed that Bharananganam Sree Krishna temple was blessed by the Pandavas themselves. There is also a Sastha Temple at Edamattom nearby.The older name of this place was Parananganam. St. Thomas, the apostle of India, social reformer Sree Narayana Guru, Mother Teresa, blessed Chavara Elias and others have visited this place. It is believed that a portion of the cross which was used to crucify Jesus Christ is kept here. Archeologists have unearthed 162 coins which belong to Buddha era (B.C 563-483), from the pilgrimage destination of Bharananganam. This place was considered to be a settlement of Buddhists.

St.Francis Assisi feast(December 8th), St. Sebastians feast (January 20, 21) and St. Alphonsa day (July 28) are the main festivals of Bharananganam pilgrimage place. People belonging to various communities live here in harmony, and the festivals of the church and temple are celebrated by all. The ornamental lamp held during the church procession was donated by the temple. This church was made a forane in 1890 itself. The first pastoral home in Kerala was built here. The ornamental gold cross which is an artistic marvel was first owned by this church at Bharananganam.

For other tourist spots in Kottayam, log on to palai.com

For more information on the land of letters, log on to kottayam.com