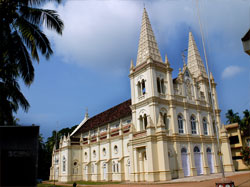 Once a fishing village of no significance in the Kingdom of Kochi in the pre-colonial Kerala, the territory that would be later known as Fort Kochi was granted to the Portuguese in 1503 by the Rajah of Kochi, who also gave them permission to build a fort near the waterfront to protect their commercial interests. The first part of the name Fort Kochi comes from this fort, Fort Emmanuel, which was later destroyed by the Dutch. Behind the fort, the Portuguese built their settlement and a wooden church, which was rebuilt in 1516 as a permanent structure and which today is known as the St Francis Church.

A mix of old Portuguese, Dutch and British houses from these colonial periods line the streets of the pilgrim centre of Fort Kochi. St Francis Church, built in 1503 by the Portuguese as a Catholic church and where Vasco da Gama was once buried, is now used by the Church of South India and is one of the national monuments of India. The Catholic church, Santa Cruz Basilica, also built by the Portuguese in the 1500s, was later destroyed by the British and rebuilt near the end of 19th century.

The pilgrim destination, Paradesi Synagogue is the oldest synagogue in the Commonwealth of Nations], located in Kochi, Kerala, in South India. It was built in 1568 by the Malabar Yehudan people or Cochin Jewish community in the Kingdom of Cochin. Paradesi is a word used in several Indian languages, and the literal meaning of the term is "foreigners", applied to the synagogue because it was historically used by "White Jews", a mixture of Jews from Cranganore, the Middle East, and European exiles. It is also referred to as the Cochin Jewish Synagogue or the Mattancherry Synagogue. The synagogue is located in the quarter of Old Cochin known as Jew Town, and is the only one of the seven synagogues in the area still in use. The complex has four buildings. It was built adjacent to the Mattancherry Palace temple on the land gifted to the Malabari Yehuden community by the Raja of Kochi, Rama Varma. The Mattancherry Palace temple and the Mattancherry synagogue share a common wall.

The pilgrim destination, Santa Cruz Basilica is a church in Kochi, Kerala built originally by the Portuguese and elevated to a Cathedral by Pope Paul IV in 1558.Later the British demolished the structure and Bishop Dom Gomez Vereira commissioned a new building in 1887. Consecrated in 1905, Santa Cruz was proclaimed a Basilica by the Pope John Paul II in 1984. This magnificent church is a must see pilgrimage destination for tourists who come to Kochi.

Santa Cruz Basilica, a Roman Catholic Cathedral is one of the finest and impressive churches in Kerala. It is a place of devotion and pilgrimage in Fort Kochi, as well as a center of historic significance, endowed with architectural and artistic grandeur and colours of the gothic style. Located close to St. Francis Church it is the capital church of the diocese of Cochin.

The pilgrim destination of St. Marys Cathedral, Ernakulam, is a Cathedral at Kochi in Kerala, India. Originally founded in 1112 AD, the Cathedral is dedicated to "Our Lady of Ports". The Cathedral was built in the early twentieth century under the direction of Mar Louis Pazheparambil; a rebuilt Cathedral was elevated to the status of a Basilica by Pope Paul VI on 20 March 1974.The church is also a prominent Marian Pilgrim Centre in India.

For more details on the queen of the Arabian Sea, log on to ernakulam.com

For information on tourist attractions near Cochin, log on to cherai.kerala.com

For details on Kerala’s first model tourist village, log on to kumbalangi.kerala.com