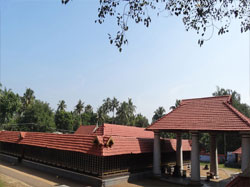 Guruvayur, the abode of Lord Sree Guruvayurappan, is located 29 kms north west to the cultural capital of Gods own country, Kerala. This narrow coastline strip of land on the south western edge of Indian subcontinent is believed to be one of the 10 pilgrimage paradises in the world. The geographical and bio persity of Kerala with the coastline beaches and stretches of backwaters lined with the swaying coconut palms on one side and evergreen forests of the western ghats with very rich wildlife on the other side makes this pilgrim destination a real paradise to the alien traveler.

Guruvayur is one of the most sacred and important pilgrim centres of Kerala, attracting thousands of pilgrims from all parts of the country. Its chief attraction is the temple dedicated to Lord Krishna known as Guruvayurappan. The town is a popular place for young couples to get married and marriage halls abound in the town. This historic temple is shrouded in mystery. According to belief, the temple is the creation of Guru, the preceptor of the Devas, and Vayu the Lord of the Wind. The eastern nada is the main entrance to the shrine. In the chuttambalam (outer enclosure) is the tall 33.5 mt. high gold plated Dwajasthambam (kodi maram or flag post). There is also a 7 mt. high Deepasthambham (pillar of lamps), whose 13 circular receptacles provide a truly gorgeous spectacle when lit. The square Sreekovil is the sacred sanctum sanctorum of the temple which houses the main deity. Within the temple there are also images of Ganapathy, Ayyappan and Edathedathu Kavil Bhagavathy.

According to legend, the idol worshipped at Guruvayur pilgrim centre is more than 5000 years old. But there are no historical records to establish it. In the 14th century Tamil literature Kokasandesam, reference to a place called Kuruvayur is made. As early as 16th century, many references are seen about Kuruvayur. In ancient Dravidic, Kuruvai means sea, hence the village on the coast may be called Kuruvayur.

Documents written by eminent historians state that the Brahmins had begun to come and settle at Kodungalloor during the period of Chandra Gupta Maurya ( 321-297 BC). Trikkunavay in the Guruvayur documents is the same as Thrikkanamathilakam or Mathilakam mentioned in the Dutch and British records. And this place was in between Guruvayur and Kodungalloor. Guruvayur was Trikkunavays subordinate shrine since they were destroyed by the Dutch in 1755. That way Guruvayur must have come into existence before 52 AD. The story of a Pandyan King building a shrine here may be a reference to the Azhavars , but they are all silent in their writing about this pilgrim destination.

It was poet Melpathurs epic Narayaneeyam which gave the temple the required publicity. The concept of Unnikrishna popularised by great devotees like Poonthanam , Kururamma and Villwamangalam brought more and more devotees to the pilgrim place of Guruvayur.

Guruvayur, the pilgrimage destination, is well connected with the other parts of the country by road and rail. The National highway passes through Kunnamkulam which is just 8 kms away from the pilgrimage place of Guruvayur. The private bus stand is towards the east of the temple, near Manjulal (the famous banyan tree). It is half an hour drive by car from Thrissur and buses ply every 5 minutes from the cultural capital, Thrissur to the pilgrimage centre of Guruvayur.

For more details on the cultural capital, log on to trichur.com

For more details on the pilgrimage destination, log on to guruvayoor.org