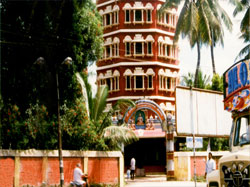 The birthplace of Adi Shankara, the great, at Kalady in modern Kerala is a major place of pilgrimage in south India.Even today, there are many shrines in this small township to his sacred memory, maintained for one thousand two hundred years by his descendants.

The very name Kalady, means “feet” in Malayalam and legend links the origin of the name to Adi Shankara. The village was previously called Sasalam. Sri Sankaracharya was born here in 788 A.D, as the only son of Sivaguru and Aryamba, a Keralite Namboodri Brahmin couple. His early life was marked by several miraculous exploits that singled him out for a pine role. Legend holds that one day, the widowed mother of little Sankara, fainted after walking three kilometres to the Periyar River for her daily bath. Feeling helpless, little Sankara prayed to Lord Krishna - his family deity. The tears of the child moved the Lord Krishna, who blessed him thus: “From now, the river will flow where your little feet marks the ground.”Immediately the Periyar River is believed to have taken course to the place marked by the little boy’s feet. Thus the place came to be known as Kalady.

The house where Adi Sankara lived, about one thousand two hundred years ago, is now a temple devoted to Goddess Sharada - and is known as Adi Sankara Janmabhoomi temple. The Sringeri Matha administers it. According to history, the thirty-third pontiff of Sringeri Sri Sachidananda Shiva Abinava Narasimha Bharati located this place with the help of scholars one hundred years ago. The then Maharajah of Travancore offered the land and rupees ten thousand (worth ten millions today in purchasing power) to the Matha to set up the temple at the birthplace of Adi Sankara. The temple was built, and consecration performed on February 21st, 1910. There are two major shrines in the temple; one dedicated to Sri Sankaracharya and the other to Goddess Saradamba, the main deity of Sringeri. Another important Shankara memorial is the Sri Adi Sankara Keerthi Sthamba Mandapam, an eight-story memorial built by Kanchi Kamakoti Math. The entrance to the memorial, guarded by two elephant statues, leads to the Paduka Mandapam. Two silver knobs represent the padukas, or wooden sandals of the teacher. The walls of the memorial feature framed relief paintings that tell the story of the great sage. Adi Sankara’s shrines in Kalady are open to all pilgrims, irrespective of religion and caste.A number of other memorable sites attributed to Adi Sankara with documented evidence are in and around the pilgrimage centre of Kalady.

For information on tourist attractions nearby, log on to athirapilly.com