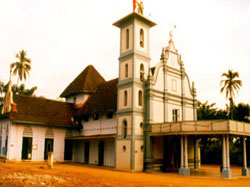 Situated about 47 km from Kochi, the pilgrimage destination of Malayattoor is famous for the Catholic Church, located on top of the Malayattoor hill, at a height of 609 mts. Dedicated to St. Thomas the apostle of Jesus Christ, thousands of pilgrims gather at the pilgrimage place for the annual festival of Malayatoor Perunnal,held during the months of March /April.

Sailing in an Arab merchant vessel, St. Thomas is believed to have landed at Kodungalloor port in Kerala, in AD 52 and that he took the initiative of establishing a Christian community at Malayattoor. In his journey through the length and breadth of the land, he is said to have founded the churches in Kodungalloor, Quilon, Niranam, Nilakkal, Kokkamangalam, Kottakavu and Paalayoor.

Blessed by natural bounties Malayattoor, as a place of pilgrimage, offers ideal environs for those seeking spiritual happiness. Nowadays, the hill shrine at Malayattoor has emerged as the largest pilgrim centre in the name of St. Thomas in India. Here, the big and auspicious occasion is the feast of St. Thomas, which is observed on the first Sunday after Easter, when thousands throng the shrine for his blessings.

Those interested in the architecture of the church at the pilgrimage centre of Malayattoor would find it highly interesting. It has a combination of Greco-Roman architecture with the altar designed in traditional Greek style, and the front portion of the church following the traditional Roman Catholic Church architecture. Behind the central altar, one can find the carvings, designs and paintings, which include the five joyful mysteries of Jesus Christ. The church has separate facilities for confession and adoration. The ancient baptismal pond and the traditional pulpit are of historical relevance at the pilgrimage site of Malayattoor.

Devotees arriving at the shrine make several types of offerings. Some climb the hill carrying cross in their shoulders; women folk would carry long brooms with them with prayers for prosperity. Some pilgrims carry stones on their heads, an offering that is meant to remove burdens from their lives. There are various religious rituals in the parish church and at the top of the mount. Some of the services include high mass, ordinary mass, Novena, Adima, Vedi Litany etc.

Kurisumudi (where they found the cross) as is popularly known, is 1269 feet above the sea level. Set in serene conditions, one cannot miss the traces of the pine. Mountain peaks gently caressing the clouds, the shimmering sheen of the Periyar below, the steep cliffs and the winding roads, all provide an ambience that is truly heavenly. Right from the time the golden cross was found, the locals began a practice of lighting an oil lamp and whenever the lamp gave in to the wind, a herd of goats came down wailing and people used to climb the mountain and light the lamp again. Pilgrims who climb the mountain, even today carry with them seasamum seeds to feed the goats, even though the goats are a rare sight.