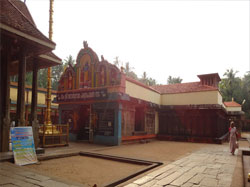 Varkala is an alluring pilgrimage tourist destination with its clean and quiet sandy beaches, red laterite cliffs, soothing mineral springs and its various places of worship.Located 40 km from Trivandrum, Kerala, Sivagiri Mutt in Varkala is the final resting place of the great social reformer, Sree Narayana Guru. The Papanasham beach here is the place where Narada is believed to have thrown his valkalam. The 2000 year old Sree Janardhana Swamy temple here is famous for the Arattu, the annual festival celebrated in March-April.

Varkala also has a seaside resort and spa. However it is primarily known as an important Hindu centre of pilgrimage.The final resting place of the great social reformer, Sree Narayana Guru, is near Varkala, atop a hill called Sivagiri.High cliffs with mineral springs rise majestically from the coastline.The beach at this place is long, sandy, serene and secluded.

According to legend, sage Narada was approached by a group of mendicants who confessed to having sinned.Narada threw his valkkalam (cloth made of the bark of a tree) into the air, and the place where it landed was subsequently named Varkala.The mendicants were directed by Narada to offer their prayers in the newly created place by the seashore. The place where they prayed for redemption, came to be known as the Papanasham Beach ( Papanasham means redemption from sins).The 2000 year old Sree Janardhana Swamy Temple and the Nature Care Centre are the two main attractions here. Varkala is considered a major pilgrimage centre for the Hindus.

The tourist atrractions at Varkala pilgrimage destination include the Papanasam beach, the Janardhana Temple, Sivagiri Mutt, Anjengo Fort, Yoga, Ayurveda, & Massage centres. For visitors yearning for a budget holiday, Varkala is the place to be in. During the off season, the area is mellow and relaxed and hotel rates drop to a couple of hundred rupees. In November, the tourist season picks up and prices soar. The season continues till March-April.

For more details on the pilgrimage destination, log on to varkala.com