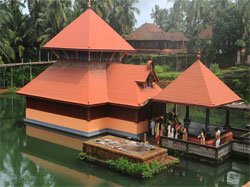 Kerala has a number of pilgrimage places and famous pilgrim centres consisting of ancient temples and shrines,remote places of worship in villages and on hillocks as well as popular and crowded pilgrim centres spread across the length and breadth of Kerala.The sacred temples of Kerala that lie in different parts of this picturesque coconut country are popular among devotees.Thiruvananthapuram, the capital city of Kerala, is known as the city of temples. There are hundreds of sacred temples in Thiruvananthapuram alone.

The land of ayurveda, yoga and meditation, Kerala provides a pure and pristine atmosphere where you can spend your pilgrimage tours in divine prayer,invoking the Almighty by participating in devotional songs, temple festivals and other temple activities.Various fairs and festivals are celebrated all year round in these pigrimage places,with special sets of religious rituals characteristic to specific festivals.Elephants have a special place in the hearts of the people of Kerala and they play an important role in religious ceremonies at the temples and other sacred places of Kerala.

Kerala has a number of pilgrimage centres of importance to Hindus, Muslims, Jains and Christians alike.Some of the popular destinations comprising temples,churches and mosques are Guruvayoor, Sabarimala, Chottanikkara, Attukal, Bharananganam, Malayattoor, Maramon, Parappanangadi etc where thousands throng to worship their deities and pay obeissance.Kerala also houses some ancient Jewish synagogues in the island town of Fort Kochi.